The Vietnam Service medal was created in 1965 and was awarded to all military personnel for service in Vietnam for more than 30 consecutive days and retroactively from November 1961 to April 1975. One of the first contracted manufacturers of this medal was His Lordship Products (HLP) which started production circa 1965. There were also other makers, E H Simon, Volupte and Williams & Anderson a lot of whose medals have become available still in their original boxes and are usually dated in pen or crayon 11/69 or 1/70. All these were mounted on a 12mm crimp suspension and after 1967 the makers mark or name was added to the rear of the crimp. HLP stamped their initials on the rim. Approximately 2.5 million US service men & women served in Vietnam. Designer was Thomas H Jones and the obverse shows a Dragon behind Bamboo trees. The reverse has a burning torch and a crossbow, the torch representing Freedom and the crossbow being an ancient Vietnamese weapon. The ribbon has green side stripes representing the jungle and the Republic of Vietnam Flag being represented by the yellow and red stripes. 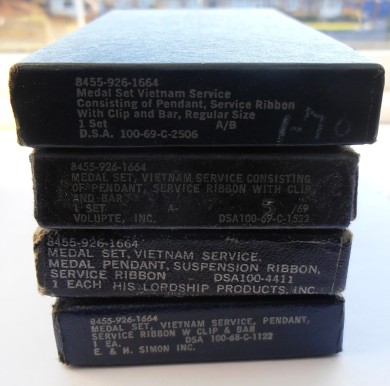 Boxed Vietnam Service Medals, Williams & Anderson 1970, Volupte 1969, HLP circa 1965-67 and E & H Simon circa 1968. These medals were issued with their service ribbon. Some can still be found in their original plastic wrapper. 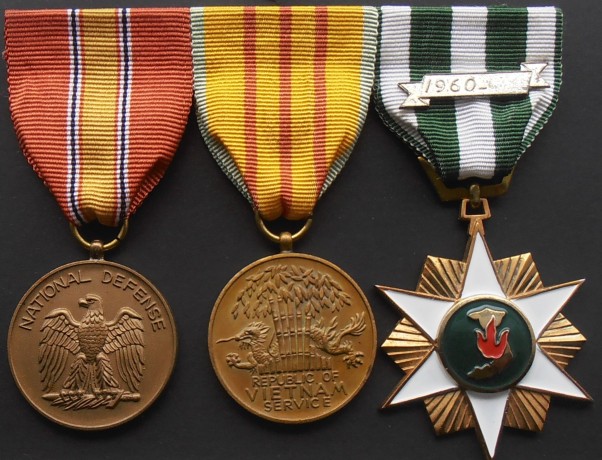 Set of Three Vietnam theatre made medals, National Defense, Vietnam Service and the Republic of Vietnam Service Medal which was authorized for wear by those who had served for a six month period in Vietnam. Note the differences in manufacture of the Vietnam service medal. Suspender knob and dragon shape different to the US manufactured medal.