These boxes show the stock number and manufacturers details plus the description of the medal enclosed. US mint issued medal boxes have reference to the service the medal is intended for e.g. US Coast Guard, Navy or Marine Corp with a description of the box contents and the stock or issue number. An example being Req No CG-3149A. (American Theatre Campaign Medal US Coast Guard). Note the gummed labels on the end of the boxes which were replaced in the 1960’s by printing the details directly on the box. Bar codes were introduced circa middle 1980’s with boxes then becoming one piece construction with open end flaps by the 1990’s. The medals would be made under contract and supplied in a cardboard box and dependent on how the medals were to be awarded to the recipient would have been put into a presentation box along with a ribbon and lapel pin. If the medals were presented in the field, then there’s every possibility this could have been straight from the cardboard box but there is film of 101st Paratroopers being presented with Silver Stars in their presentation boxes at a ceremony in Carentan, Normandy, 1944.

Early decorations were issued in colour coded hinged cardboard boxes with domed or flat lids. The Purple Heart had a flat lid and Purple coloured box and the Navy DSM was light Blue domed or flat. Other medals were as follows:

These boxes were unnamed and are extremely rare and expensive to buy. There is also an unnamed short version of the coffin box which were issued with the earlier decorations. 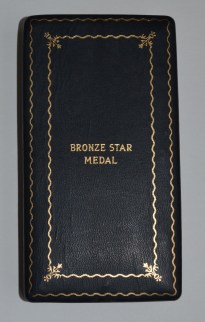 WW2 issued box. Sometimes known as the Coffin type, these would also contain the ribbon and lapel badge. Most common for these were the Distinguished Flying Cross, the Bronze Star, the Silver Star and the Purple Heart. Medals issued in these types of boxes can be of a higher price especially if they are named or have provenance. This one is for the Bronze Star with V for Valor (awarded for distinguished actions in combat), Service Ribbon and Button Hole Badge. The Bronze Star has been issued in a presentation format with a “Coffin Box” up to Vietnam. The medals being a later issue manufacture DSA code 100-69-C-1499 contract No 8455-269-5749 manufacture date 1969. This could be due to the supplier’s stock levels having coffin boxes available to issue with the medal, ribbon and lapel pin. There are also 1944 manufactured Bronze Star’s repackaged in a cardboard box but with a bar code and DLA code 8455 00 245 3829 which would date this repackage from 1977 to 1994. 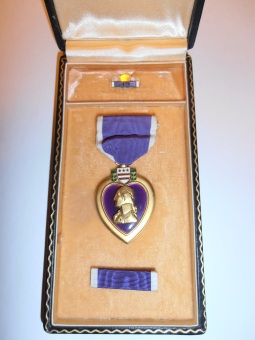 Purple Heart (Unnamed or numbered) in its original box with ribbon and lapel pin. Also with this medal came a certificate from Robert P Patterson, who was Secretary of War September 1945 to July 1947 which would make this a WW2 post war issued decoration.

(Left) Plastic presentation box with USAF Combat Readiness Medal, Ribbon and Lapel Pin. This award was originally senior to the Air Force Commendation Medal (Right) circa 1964 to 1967 when the award criteria was revised and the Combat Readiness Medal was designated as a service medal and is therefore rarely seen in a presentation box and issued without the lapel pin.

Centre: Leather presentation box without indent to accommodate larger medals such as the Legion of Merit (Legionnaire) with service ribbon.

These type of presentation boxes are still issued along with the more modern plastic type.

The Gallantry awards having the medal type embossed on the front cover.

Presentation case box as made by Arrow Manufacturing, 1971. Case has different fixing points to accommodate medals and ribbons with either pin or clutch back mountings. 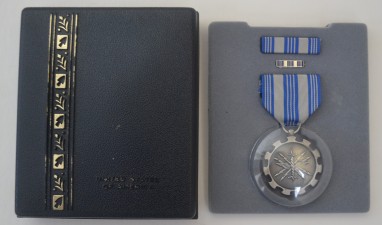 Some service medals are also issued in brown envelope packets such as the Navy Expert Rifleman Qualification Badge as shown above. Although awarded as a badge they are worn as a medal. 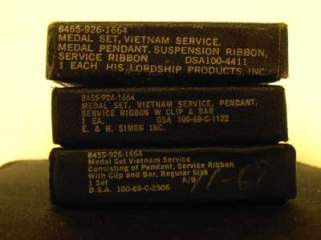 With reference to the box numbers, all 3 have the Federal Stock Number 8455-926-1664 and a Defense Supply Agency (DSA) number which are different. The top medal manufactured by Lordship Industries has a DSA 100-4411 with the 100 code for the Defense personnel support center followed by the contract number 4411.

100 = the code for the Defense personnel support center.

100 = the code for the Defense personnel support center.

Federal Stock Numbers (FSN) first appear around the mid Fifties till 1974 when they were changed from 11 digits to 13. 00 being added at digits 5 & 6. This is the 2-digit country of origin code followed by the 7 digit item identification code. 00 & 01 are for the United States whereas 99 the United Kingdom. FSN also changed in 1974 to the National Stock Number (NSN) also referred to as the Nato Stock Number.

There is also a difference in the style of box used and the inner card medal mount. This numbering system was used from circa mid to late 1960’s to 1977 when the DSA changed to the DLA, Defense Logistics Agency but kept the same numbering system. The specification on a military contract will specify a certain brooch. A variance to the contract can be applied for if the manufacturer has other types of suspender brooch available due to old stock. Local suppliers of medals will have old stock to sell along with new which may have been in storage for some period of time. These suppliers may also order in stock items from other suppliers and make up a medal, ribbon and lapel badge boxed presentation set. The medal could be made by Graco Industries (G27), the Ribbon by Vanguard (V21) and these would be issued to order with any parts older or newer that were available.

To summarise, from the mid sixties the prefix of DSA was used followed by a 1 and a suffix of E6Y (Y=year).

From 1994 to present day DLA has changed to SLO, System Progam Office.

Although not all manufacturers used the DSA numbers, some used them at least from 1963. Volupte Manufactured the Armed Forces Expeditionary DSA-1-2446-63-8 October 1963.

Whereas the Defence Medal has no DSA number on a box dated April 1968 with some of the above still using paper labels and others printing the details directly onto the box lid. This would indicate that there is some crossover in manufacturing and issuing methods when using the DSA number and box labelling. Prior to this following WW2 medal boxes were paper labelled with the stock number details, medal detail and manufacturer although some were not manufacturer named and were marked U.S. mint and were marked for the specific branch of service.

The following are authorized components of the Air Medal and the applicable specifications for each: