On Sunday 11th November 2018 we commemorate 100 years since the cessation of hostilities between the Allied Forces and Imperial Germany on the European Western Front, Eastern Front and the Mediterranean.

The First World War or Great War would not officially end until the signing of the Versailles treaty in 1919 but not until the losses of all the countries involved including Great Britain, France, Germany (Austria-Hungary), Russia, Italy and of course the United States of America totalled somewhere near 18 Million.

Fighting alongside the British and French forces in Europe the American Expeditionary Force was commanded by General John J Pershing when the United States entered the war in April 1917. The AEF fought its main battles in 1918 at St Mihiel and the Meuse Argonne region. The AEF also fought alongside the Italian Army against Austro-Hungarian forces and sent an expeditionary force to Russia. There were 4 divisions in France by the end of 1917. 1st Division of regular army troops, the 2nd Division of regular army and United States Marines, the 26th National Guard Division and the 42nd “Rainbow Division of National Guard from nearly all the states in the U.S. By the end of 1918 there were 7 Divisions of the AEF numbering some 500,000 men under Pershing’s command of the 1st Army. U S casualties amounted to approx. 114,000 killed whilst serving in Europe. 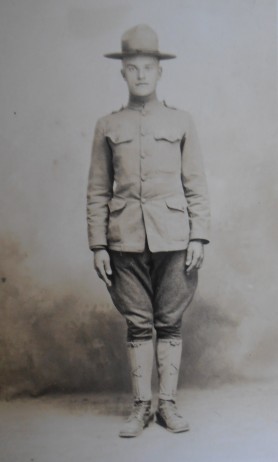 Allan Donald, Intelligence Squad, Battery D, 3rd Heavy Field Artillery. In 1918 the American Expeditionary Force numbered circa 2 million men at the time of the signing of the Armistice.

23 November 1918, to 1 April 1920 for service with the American Expeditionary Force Siberia.

A clasp 23 November 1918, to 1 April 1920 for service with the American Expeditionary Force, Siberia.

“Defensive Sector” was also added for general defense not involved in a specific battle.

Clasps for the Navy include England, France, Italy, Russia, Siberia and the West Indies.

Reverse has all the allied nations who took part in the “Great War for Civilization”.

WW1 Commemorative medals awarded by the State of New York (No 31801) and the State of Connecticut (made by Robbins Co, Attleboro, Mass). 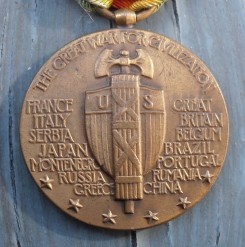 Reverse of the US WW1 Victory Medal showing the other allied countries who served during the “Great War”. I’ve always wondered who came up with that title but I suppose until 1939 and the outbreak of a second Great War then you could call this war the First.

Over the years we in the UK have remembered our sacrifice of the young men from these shores who were killed not only in the first and second war but the conflicts since then. However this Armistice Day does mark the 100th Anniversary since the guns fell silent and its easy for us to forget the other allied sacrifices made by countries like the United States.

Lest We Forget…and God Bless America.