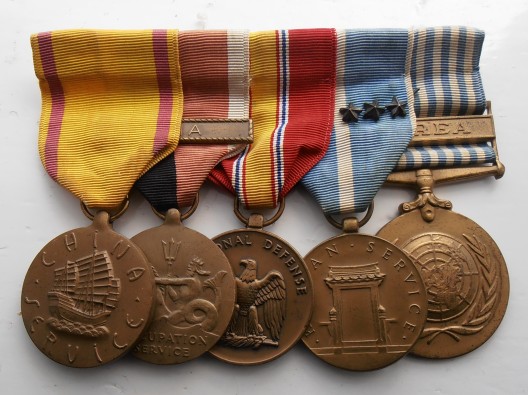 Recently attended a local medal fair and bought this set of five mounted medals to the US Navy for service in the Korean War. Very topical with what’s going on in the news.
Been after a set of these for some time so was well pleased these were available.
Left to right: China Service (Navy), Occupation Service (Navy with Asia Bar), Defense Medal (replaced ribbon?), Korean War service (with 3 battle stars) and United Nations Medal for Korea.  Unfortunately not named but nice to have especially with the UN medal attached. Both the China service and Navy Occupation service are US Mint manufactured.

Authorised August 1940 the China Service medal awarded for service during two periods July 7th 1937 to September 7th 1939 for service ashore in China and post war September 2nd 1945 to April 1st 1957 for service in China, Matsu Straits and Taiwan, a bronze star was added if service personnel qualified for both time periods.

Awarded over three different periods (1950-1959, 1961- 1974 and from 1990 onwards) the National Defense service Medal was awarded to enlisted men and officers for active duty service.

United Nations Service Medal (Korea) Authorised 1951 and awarded to all services on behalf of United Nations Forces in Korea June 1950 to July 1954. Other countries were also awarded this medal including British and Commonwealth forces for service in Korea.

Lets hope that Donald and Kim keep up the good work so we don’t have to issue a second Korean war medal. Here’s to peace on the peninsula.