Classed as a civilian award the Merchant Marine WW2 Victory Medal was established August 1946 for service on any vessel for 30 days’ service between 7th December 1941 to 3rd September 1945 operated by the Maritime Commission or the War Shipping Administration. The US Merchant Marine took part in every landing operation in WW2 and beyond. Even before America entered the war the Merchant Marine were shipping supplies across the Atlantic to the UK and Soviet Russia on what was a dangerous journey. German Sea mines were a big threat in the Atlantic and the first US ship sunk was the MS City of Rayville November 1940 with one mariner killed. Vulnerable to attack the moment they left port, Mariners faced other perils including Kamikaze, surface raiders and U boats.

The Merchant Marine Service were responsible for delivering Tanks, Airplanes, Ammunition, fuel and food supplies and also participated in amphibious landings including Normandy and Okinawa. During WW2 some 55,000 to 250,000 seamen served with the Merchant Service and were the last to return following wars end with casualties due to ships striking mines. Although President Roosevelt pushed for better recognition, the Merchant Marine Service never received the same post war benefits as the military personnel who served. Although Congress created an application process in 1977 for Veteran status, Mariners are still seeking full official recognition for the role they played in World War 2. 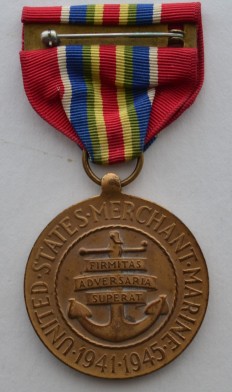 A round bronze medal designed by Paul Manship (an apt name) with the obverse showing a female figure (Possibly Nike, Goddess of Victory) holding a trident and Olive branch and to the bottom right there is a submarine conning tower, while on the reverse an Anchor with the words “Firmitas Adversaria Superat” (strong enough to overcome adversity) and “United States Merchant Marine 1941-1945” around the edge of the anchor. The ribbon has the red, white and blue of Old Glory and green, white and yellow stripes also. The medal would have been awarded for service in both the Atlantic and the Pacific Campaign.

Cap Badge of the US Merchant Marine depicting the Eagle, shield and Anchor on a Laurel Wreath.